Traditional Buildings of the Karakum 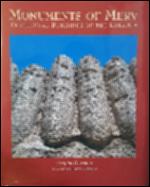 Archaeological research and ancient records have been combined in this work to provide a comprehensive account of the buildings of Merv, an oasis city in the middle of the Turkmenistani desert. Founded in the sixth century BC, Merv was a key staging post along the Central Asian trade routes linking Europe and India, and its buildings - palaces, pavilions, gardens and towers springing from the sand - impressed all who visited it. Although eroded by time and weather, enough remains of these buildings to illustrate the evolution of architectural styles in the early medieval and Seljuk eras (7th to 13th cents AD), a period during which the Islamic world developed its own unique range of building types and decorative motifs. This book examines in detail each of the surviving buildings of Merv, discussing their form and function – from palaces to ice-houses, from fortified watch-towers to libraries and dovecotes. Details of doors, windows, corridors and stairways, monumental entrances, rooms, domes and vaults, niches, wall decoration and flooring are described and illustrated in great detail. The book will serve as a major resource for scholars of Islamic architecture.

Society of Antiquaries of London