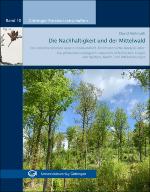 Knowing the history and context of a piece of landscape is an unfortunately often neglected necessity for planning disciplines (including conservation and forestry). Just as a doctor can only suggest an appropriate therapy if he knows the antecedents of the disease, the possible or appropriate changes to, for example, a forest can only be seriously considered if the historical, economic and social causes for its creation and current state are described and understood. The present work undertakes this comprehensive description for the remaining oak-hornbeam forest relicts, and widespread beech forests near Göttingen. Since vegetation science is understood here as an art of telling the story(s) and current background of an object, the vegetation study of these forests, however, only forms the basis for telling a multifaceted story. This story focuses on the historical coppice with standards forests, the struggle for their conversion into beech high forests, and the underlying sustainability views of various actors. Methodically, the author draws on current, archival and historical-contemporary literature from over 400 years. The result is a closely interwoven web consisting of: the perfect integration of coppice with standards into the historical economy, numerous competing notions of sustainability and their implementation in the context of sovereign power claims, as well as the resulting silvicultural change and the defamation of the coppice with standards forest. In the process, the creation and aftermath of myths that have never been questioned internally in forestry to this day, and the short-sightedness of current nature conservation are also uncovered. The overall result is not only the "disenchantment" of the "beautiful oak-hornbeam forest", but also that of the currently predominant beech forest on limestone - a forest type that, thanks to its abundance of colourful spring geophytes, has been called not only pretty, but also "natural". However, interdisciplinary observation suggests that the species richness of these forests is in part the consequence of the historical, formerly widespread coppice with standards forestry, which "persists" in the herb layer for a long time, but will also disappear in the future.