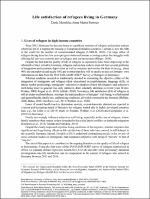 Since 2015, Germany has been hosting noticeable incoming flows of refugees and asylum seekers, leading, in 2020, the ranking of European countries and being the fifth in the world ranking for the number of hosted refugees. Despite the quality of life of refugees is expected to be improved in the aftermath of their arrival to Germany, refugees are still facing several problems of integration and economic deprivation (e.g., about 90% are unemployed). Hence, it is a worthwhile exercise to study how satisfied they are with their present life. Using a sample of 3,408 individuals from the German IAB-BAMF-SOEP Survey of Refugees (regarding refugees and asylum seekers who came to the country between January 2013 and January 2016), we present some preliminary analyses on the life satisfaction (LS) of these vulnerable individuals. Particularly, satisfaction levels were arranged by quartile and an ordinal regression model was estimated to focus on the association among levels of LS and main socio-demographic characteristics. Syrians experience worst perceived quality of life (LS), such as older and higher educated people, other things being equal. Uncertainty, due to their legal status or to lesser support received by law, may explain that those with dismissed or pending asylum application are less satisfied than refugees. Family arrangements, as expected, has an impact, other things being equal, on the overall life satisfaction: the higher the number of co-residing household members the higher the LS; cohabiting partner of spouse affect positively LS. Noticeably, LS is positively associated with satisfaction in specific domains such as health, privacy in the current living arrangement, and neighbourhood safety. Interesting insights come out for policy design.