Chapter Clustering students according to their proficiency: a comparison between different approaches based on item response theory models 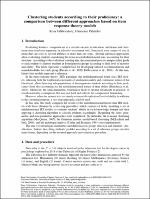 Evaluating learners' competencies is a crucial concern in education, and home and classroom structured tests represent an effective assessment tool. Structured tests consist of sets of items that can refer to several abilities or more than one topic. Several statistical approaches allow evaluating students considering the items in a multidimensional way, accounting for their structure. According to the evaluation's ending aim, the assessment process assigns a final grade to each student or clusters students in homogeneous groups according to their level of mastery and ability. The latter represents a helpful tool for developing tailored recommendations and remediations for each group. At this aim, latent class models represent a reference. In the item response theory (IRT) paradigm, the multidimensional latent class IRT models, releasing both the traditional constraints of unidimensionality and continuous nature of the latent trait, allow to detect sub-populations of homogeneous students according to their proficiency level also accounting for the multidimensional nature of their ability. Moreover, the semi-parametric formulation leads to several advantages in practice: It avoids normality assumptions that may not hold and reduces the computation demanding. This study compares the results of the multidimensional latent class IRT models with those obtained by a two-step procedure, which consists of firstly modeling a multidimensional IRT model to estimate students' ability and then applying a clustering algorithm to classify students accordingly. Regarding the latter, parametric and non-parametric approaches were considered. Data refer to the admission test for the degree course in psychology exploited in 2014 at the University of Naples Federico II. Students involved were N=944, and their ability dimensions were defined according to the domains assessed by the entrance exam, namely Humanities, Reading and Comprehension, Mathematics, Science, and English. In particular, a multidimensional two-parameter logistic IRT model for dichotomously-scored items was considered for students' ability estimation.