The Connected World of Emily Dickinson 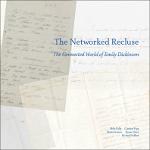 The image is so well known it is practically iconic: The reclusive poet, feminine and fragile, weaving verse of beguiling complexity from the room in which she kept herself sequestered from the world. The Belle of Amherst, the distinctive American voice, the singer of the soul’s mysteries: Emily Dickinson. Yet that image scarcely captures the fullness and vitality of Dickinson’s life, most notably her many connections—to family, to friends, to correspondents, to the literary tastemakers of her day, even to the unnamed, and perhaps unknowable, “Master” to whom she addressed three of her most breathtaking works of prose. Through an exploration of a relatively small group of items from Dickinson’s vast literary remains, this volume—an accompaniment to an exhibition on Dickinson mounted at The Morgan Library & Museum in New York—demonstrates the complex ways in which these often humble objects came into conversation with other people, places, and events in the poet’s life. Seeing the network of connections and influences that shaped Dickinson’s life presents us with a different understanding of this most enigmatic yet elegiac poet in American letters, and allows us more fully to appreciate both her uniqueness and her humanity. The materials collected here make clear that the story of Dickinson’s manuscripts, her life, and her work is still unfolding. While the image of Dickinson as the reclusive poet dressed only in white remains a popular myth, details of Dickinson’s life continue to emerge. Several items included both in the exhibit and in this volume were not known to exist until the present century. The scrap of biographical intelligence recorded by Sarah Tuthill in a Mount Holyoke catalogue, or the concern about Dickinson’s salvation expressed by Abby Wood in a private letter to Abiah Root, were acquired by Amherst College in the last fifteen years. What additional pieces of evidence remain to be uncovered and identified in the attics and basements of New England? Published to accompany The Morgan Library & Museum’s pathbreaking exhibit I’m Nobody! Who are You? The Life and Poetry of Emily Dickinson—part of a series of exhibits at the Morgan celebrating and exploring the creative lives of significant women authors—The Networked Recluse offers the reader an account of the exhibit itself, together with a series of contributions by curators, scholars of Dickinson, and poets whose own work her words have influenced.