Chapter Tourism of Italians in Italy through crisis and development: the last 15 years, region by region 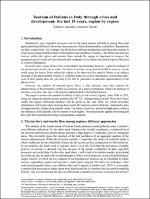 Tourism is a very important economic activity for many nations and Italy is among those that particularly benefit from it. In fact, even during the period of pandemic, despite the crisis, tourism in Italy proved to be a particularly resilient sector: among all European countries, Italy is the one that recorded the highest number of total tourist nights-spent. However, tourism statistics are not yet exhaustive in describing a highly variable phenomenon at the territorial level. Even the tourism satellite accounts, so useful for sectoral planning at regional level, are compiled for the whole country. Instead, the territories do not always know themselves, while the enhancement of landscape resources is one of the major issues that has not always been adequately analyzed; also in the recently approved Italian PNRR/Next Generation EU. In this article, we aim to examine the trend of the tourism phenomenon in the various Italian regions over the past 15 years; a period marked by crises of different origins (economic, political, health) which slowed down the economic development of the third millennium. In particular, given the problems mentioned above, we decided to start the research by considering the arrivals in hotels and non-hotel establishments by Italian tourists. The hospitality business is in fact an important part of the tourism industry. We expect domestic tourism to have greater stability, being less affected by international problems. We then examined the tourism of Italians in Italy, in the various regions, from 2006 to 2020. This analysis allowed us to observe the tourism phenomenon in Italy from a different perspective, observing, region by region, the relationship between tourism within the region and tourism coming from others regions. The choice of arrivals, instead of night spent, reduces the influence of the specific type of tourism in each region. The first results appear interesting.