Champion of Imagination in American Art 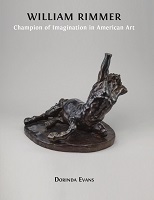 William Rimmer (1816–1879) is arguably the first modernist American sculptor, although his inventive originality has not been fully acknowledged. Rimmer cultivated an art of ideas and personal expression whilst supporting himself as a physician and, later, as a teacher of art anatomy at the Cooper Union School of Design for Women in New York. Unlike his contemporaries, he advocated the creation of sculpture drawn entirely from the artist’s imagination, as opposed to antique archetypes or live models. In this way, he sought to reframe excellence in American art as something that must be found within, rather than derived from Europe. In this new monograph, the meaning of Rimmer’s works is for the first time considered from a combination of perspectives, such as close visual analysis (including X-ray and infrared), historical documentation, and social context. These are enriched with discussion of the artist’s own bipolar disorder, deeply-held spiritualism, and views on gender equality—considering women just as talented as men, he used naked male models in all-female classes long before his contemporaries, and produced an allegorical sculpture of fighting lions that criticized the tyranny of men over women. This book will be of great interest to academics, students, art museums, collectors, dealers, art historians, and members of the public with an affinity for Rimmer’s work. It will also appeal to those with a broader interest in American culture.