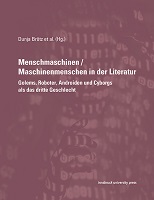 Artificially created (living) beings that are neither human nor machine, neither man nor woman, neither organism nor dead material, have occupied our imagination for thousands of years. For example, Aristotle complained in his main work Politics (4th century BC) that there were (still) no human-like machines that could take over the tasks of slaves and thus revolutionize social life. The world of science fiction and fantasy literature is also teeming with homunculi, golems, robots, androids and cyborgs. In the course "Human machines / machine people in literature. Golems, robots, androids and cyborgs as the third sex" held by Dunja Brötz at the Leopold-Franzens-University Innsbruck in the winter semesters 2020/21 and 2021/22, many of these literary figures were examined by students of the master's program "Comparative Literature" from a discourse-analytical and gender-theoretical perspective. This anthology summarizes some of these innovative analyses, whose chronological arc spans from antiquity to the present and throws literary highlights on human machines and machine people in texts by Ovid, E.T.A. Hoffmann, Gustav Meyrink, Marge Piercy, Andreas Eschbach, Walter Moers, Angelika Meier, Ian McEwan, Kazuo Ishiguro, Martina Clavadetscher and Raphaela Edelbauer.