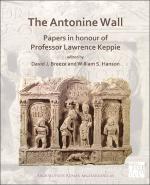 The Antonine Wall, the Roman frontier in Scotland, was the most northerly frontier of the Roman Empire for a generation from AD 142. It is a World Heritage Site and Scotland’s largest ancient monument. Today, it cuts across the densely populated central belt between Forth and Clyde. In this volume, nearly 40 archaeologists, historians and heritage managers present their researches on the Antonine Wall in recognition of the work of Lawrence Keppie, formerly Professor of Roman History and Archaeology at the Hunterian Museum, Glasgow University, who spent much of his academic career recording and studying the Wall. The 32 papers cover a wide variety of aspects, embracing the environmental and prehistoric background to the Wall, its structure, planning and construction, military deployment on its line, associated artefacts and inscriptions, the logistics of its supply, as well as new insights into the study of its history. Due attention is paid to the people of the Wall, not just the officers and soldiers, but their womenfolk and children. Important aspects of the book are new developments in the recording, interpretation and presentation of the Antonine Wall to today's visitors. Considerable use is also made of modern scientific techniques, from pollen, soil and spectrographic analysis to geophysical survey and airborne laser scanning. In short, the papers embody present-day cutting edge research on, and summarise the most up-to-date understanding of, Rome's shortest-lived frontier. The editors, Professors Bill Hanson and David Breeze, who themselves contribute several papers to the volume, have both excavated sites on, and written books about, the Antonine Wall.