Coinage, Kings and the Viking Great Army in Oxfordshire, AD875–880 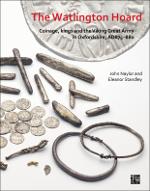 The Watlington Hoard was discovered in southern Oxfordshire in 2015 by a metal-detectorist, and acquired by the Ashmolean Museum, Oxford in 2017. A nationally-important find of coinage and metalwork, and the first major Viking-Age hoard from the county, it dates from the late 870s, a fundamental and tumultuous period in Britain’s history. The contents of the hoard include a highly significant collection of over 200 silver pennies, mostly of Alfred the Great, king of Wessex, and Ceolwulf II, king of Mercia, transforming our understanding of the coinage in this period, and 23 silver and gold pieces of contemporary metalwork much of which was derived from Scandinavia. Presenting the complete publication of the objects and coins in the Watlington Hoard – including an important re-assessment of the coinage of the late 870s – the authors discuss its wider implications for our understanding of hoarding in late 9th-century southern Britain, interactions between the kingdoms of Wessex and Mercia, and the movements of the Viking Great Army after the Battle of Edington in 878. The book also relates another side to the hoard’s story, beginning with its discovery and excavation, charting its path through the conservation work and acquisition by the Ashmolean Museum to the public outreach projects which ran alongside the scholarly research into the hoard.